Evert Smit joined ERNI in September 2018. Currently Principal Consultant, Evert is responsible for topics like Strategy, Change Management, Digital Transformation and Data Intelligence. In this interview, he summarises the bestselling book by Juval Noah Harari, Sapiens. He will also speak about how this book influenced him in his sales and leadership role. 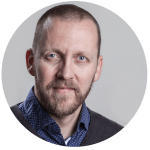 Evert, how did you come across this book?

Sapiens was written in 2011, being translated in 2014 and also later followed by other stories that are good to read too, mostly because they are partially scientific and the author uses logical arguments for explaining why he feels the way he does. He argues that there were a couple of large revolutions that made Homo sapiens dominate the other species.

Can you tell us a bit about the author?

Harari is an Israeli public intellectual, historian and a professor in the Department of History at the Hebrew University of Jerusalem. He won the Polonsky Prize twice in 2009 and 2012. In 2011, he won the Society for Military History’s Moncado Award for outstanding articles in military history. In 2012, he was elected to the Young Israeli Academy of Sciences. A very admirable personality.

He has a good storytelling style and supports his arguments very well. I did not actually read this book; I listened to it as an audiobook. I also often re-listen to books more times afterward to catch the parts I missed. So, Harari talks about four revolutions. Sapiens according to him developed because of the ability of imagination. That was the first: the Cognitive revolution around 70,000 years BC. The other three revolutions were the Agricultural Revolution, the unification of humankind through the various imperia and lastly the Scientific Revolution, meaning the emerging of objective science.

What was the main thought you took away from the book?

I would say that it is the fact that evolution is what drives us as a human species. It is more of an analytical book rather one trying to make a point. It provides a short history of humankind.

Is there something that especially resonated with you?

The book as such made me think and brought me to self-reflection. It made me be more thorough about some thoughts I have, both in my professional and personal life. To me, the book points out that everything is connected and there is a reason for the place we as humankind find ourselves. I am a fan of letting people have their own thoughts, which can lead to great results. In the sales process and in general, it motivated me to more thoroughly observe people – their motivations and reactions.

Would you recommend this book?

I have already recommended it to many people; to those who like history, but also those who are searching for a different view on evolution.