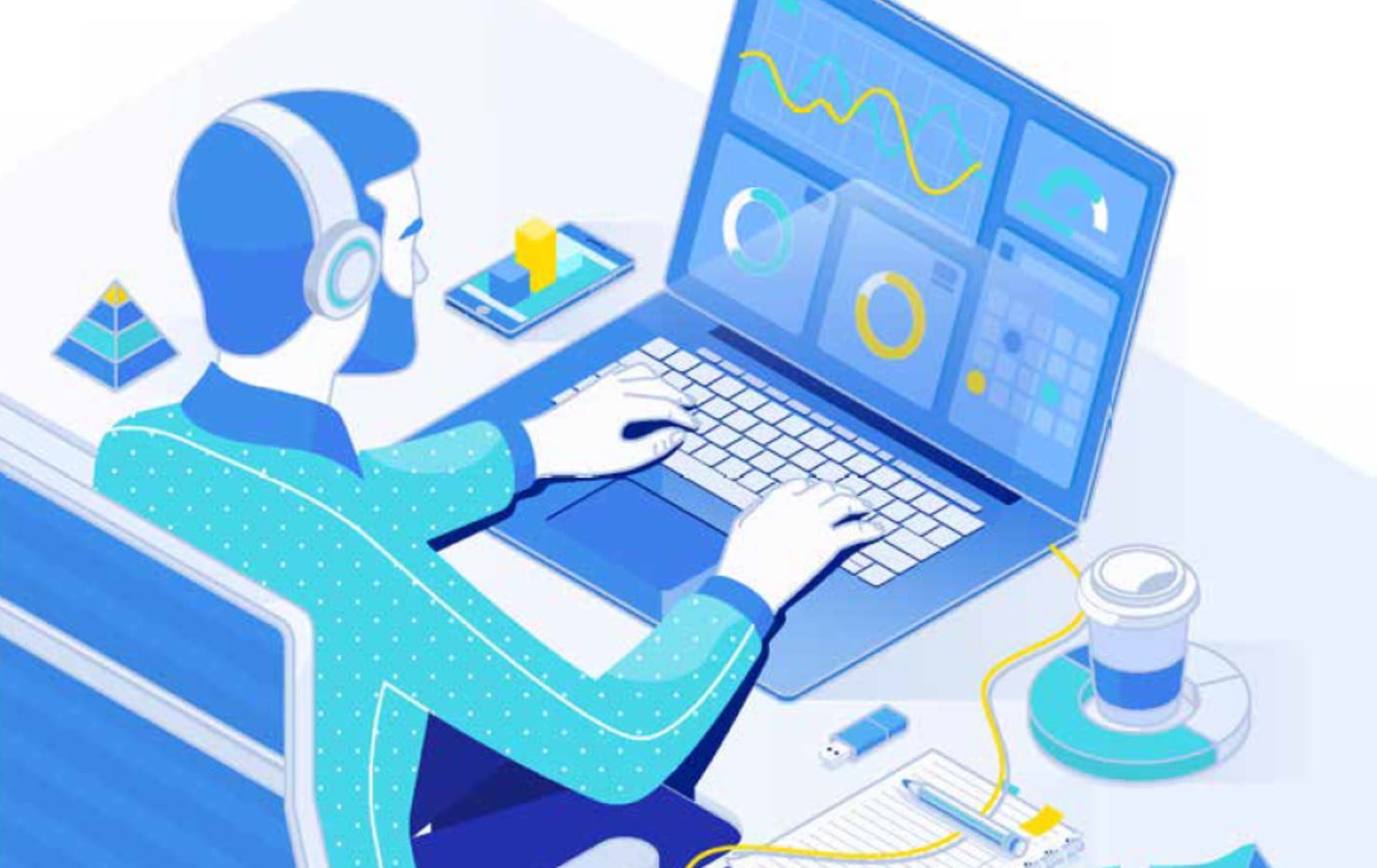 Robotic Process Automation, or RPA for short, has raised many hopes in recent years and caused a stir in the financial services industry. What can this technology do and what can it not do? Sandra Bruderer and Remo Rambaldi, Senior Consultants at ERNI, recommend a well-considered use of software robots. 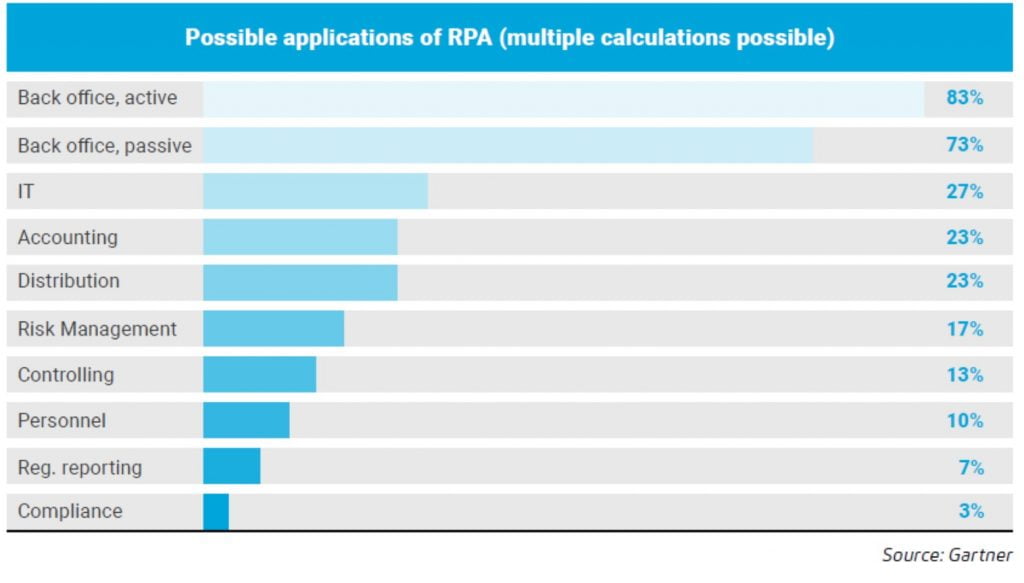 No, a “robot“ in the sense of RPA is not a machine that physically exists on a factory floor and assembles cars. And it certainly has nothing in common with R2D2 from Star Wars. In this case, the term “robot“ refers to software that can be used to automate existing processes without having to adapt the respective application or implement a new interface.

There are numerous possible applications for this, especially in banks and insurance companies, and according to a forecast by Gartner analysts, the market for RPA tools is expected to grow by 41 percent annually until 2022. “Yes, this technology can indeed also be very helpful in certain areas in the financial services industry,“ says Remo Rambaldi. “Especially when it comes to achieving cost savings very quickly without having to implement large digitization projects.“

Sandra Bruderer sees the back office as a possible area of application, since “there are many repetitive and routine activities“. In this case, RPA could very usefully relieve people of often rather tiring and strenuous tasks, so that they could spend more time on demanding activities. “And especially in the case of banks and insurance companies there is more meat on the bone simply because of the large number of similar procedures,“ she points out the special potential in the industry. On the other hand, the two experienced consultants consider the use of the automation software in many other areas, such as compliance or human resources, to be less sensible – for very different reasons. As regulations tend to increase rather than decrease, the complexity here is also constantly increasing. “RPA makes the most sense when it is a consistent, structured process that needs to be automated. And it should have a high volume, because only then it pays off,“ says Rambaldi.

People are not replaceable everywhere

And when it comes to recruiting, for example, no algorithm today can really replace the human being and his or her discretionary scope. The same applies to bookkeeping and controlling – human know-how is indispensable there, too. The two consultants describe an example from their consulting practice in IT, where the issue was the allocation of user rights for application access. An employee had to go through a huge Excel list and find out who should be given which rights according to the role concept. “Here the robot was able to find a quick remedy and save a lot of time,“ they report.

However, the two experts see three things as prerequisites for use in such tasks: The data must already be available in digital form and there must be a precisely defined set of rules on the basis of which the software robot makes “decisions“. Finally, the number of tasks to be performed must be large enough to make the effort worthwhile. Sandra Bruderer cites the following example: “If a process occurs in a large number in one year and the employee needs two minutes or even more time for it each time, then the use of RPA can pay off“. But if this process only occurs about 1000 times a year and the employee only needs 30 seconds to complete it, then it is probably not worthwhile.

Bridging technology for a limited period of time

With this knowledge in mind, ERNI consultants also go to their customers and provide advice there – solutionoriented and neutral. “We check very carefully whether RPA can solve the problems and we also point out, that a company usually only buys itself some time in the short term“. But in the long term, he says, a software robot alone does not represent a holistic and sustainable solution or replace the comprehensive digitization of end-to-end processes.

However, it could very well help to implement quick partial solutions. “In our eyes, RPA is a good bridging technology, whose use for a limited period of time can make sense,“ says Remo Rambaldi. The big advantage is that the software can be introduced quickly and is fully operational after a short time.

Many banks, for example, are currently pushing ahead with e-banking, and more than ever before, many processes at insurance companies can already be handled online. RPA can also be a useful addition to such processes for those financial service providers. Especially when artificial intelligence (AI) is used.

This is because it can do something that RPA cannot do – namely process unstructured documents. It would therefore be possible to use machine learning to do some preliminary work and then transfer the structured data to a robot for further processing.

In general, however, this automation software is also subject to the strict regulatory requirements that every human employee in the financial services industry has to observe. Thus, the software robot is assigned to a team leader, who is responsible for its deployment. Before each operation there is an extensive test phase to exclude all complications and above all the violation of banking secrets.

“It goes without saying, that the use of a robot also requires the acceptance of the entire team in the company,“ Remo Rambaldi adds. “That‘s why we place great emphasis during the introduction on explaining the benefits of such software and showing, what it can and cannot do and what access to applications it actually gets“.

The consultants train interested back-office staff in new technologies, such as RPA, artificial intelligence, etc., and are also aware of their concerns. But during training they can quickly make it clear that RPA is a solution for mainly simple processes and not a job killer.

“We always call this a virtual temporary colleague who joins in to help quickly and reliably with tasks that are a time-eater for the employee due to the quantity and constant repetition, so that without them it is easier to concentrate on complex tasks,“ says Sandra Bruderer.